#lifeonair: Cody Miles Drives It. Shows It. Tracks it… AND WINS

We’re dropping the mic..and letting Cody Miles tell everyone about his #lifeonair: I’ve been into cars as long as I can remember, specifically Japanese cars. Growing up with motocross, open land, and an abundance of dirt trails and mountains, my first vehicle was naturally a 2005 Toyota Tacoma. I began working at age 15 and put every […]

We’re dropping the mic..and letting Cody Miles tell everyone about his #lifeonair:

I’ve been into cars as long as I can remember, specifically Japanese cars. Growing up with motocross, open land, and an abundance of dirt trails and mountains, my first vehicle was naturally a 2005 Toyota Tacoma. I began working at age 15 and put every penny I had into the truck to transform it into what I thought it should’ve been all along. I had my fun in the dirt with it for years, but my love for JDM cars finally got the best of me in 2010. I kept the Tacoma as a daily, and picked up a Nissan S13 swapped SR20DET rolling chassis. The S13 had several parts missing and I knew it would take a lot of time to get it going again, but I didn’t care because I knew in the end it would all be worth it.

Three years into my drift car build, I felt as if I was satisfied and finished with offroad completely, and wanted to trade the Tacoma for a car. Thanks to hard work and successful career advancements I was finally in a position to search for my dream car, a 2007 Subaru STi. After some searching I picked up exactly what I wanted, an Urban Grey Metallic GD STi. The plan for this car was to keep things mild and drive it as my new daily…. (editor’s note: YEA RIGHT, we’ve all said that) 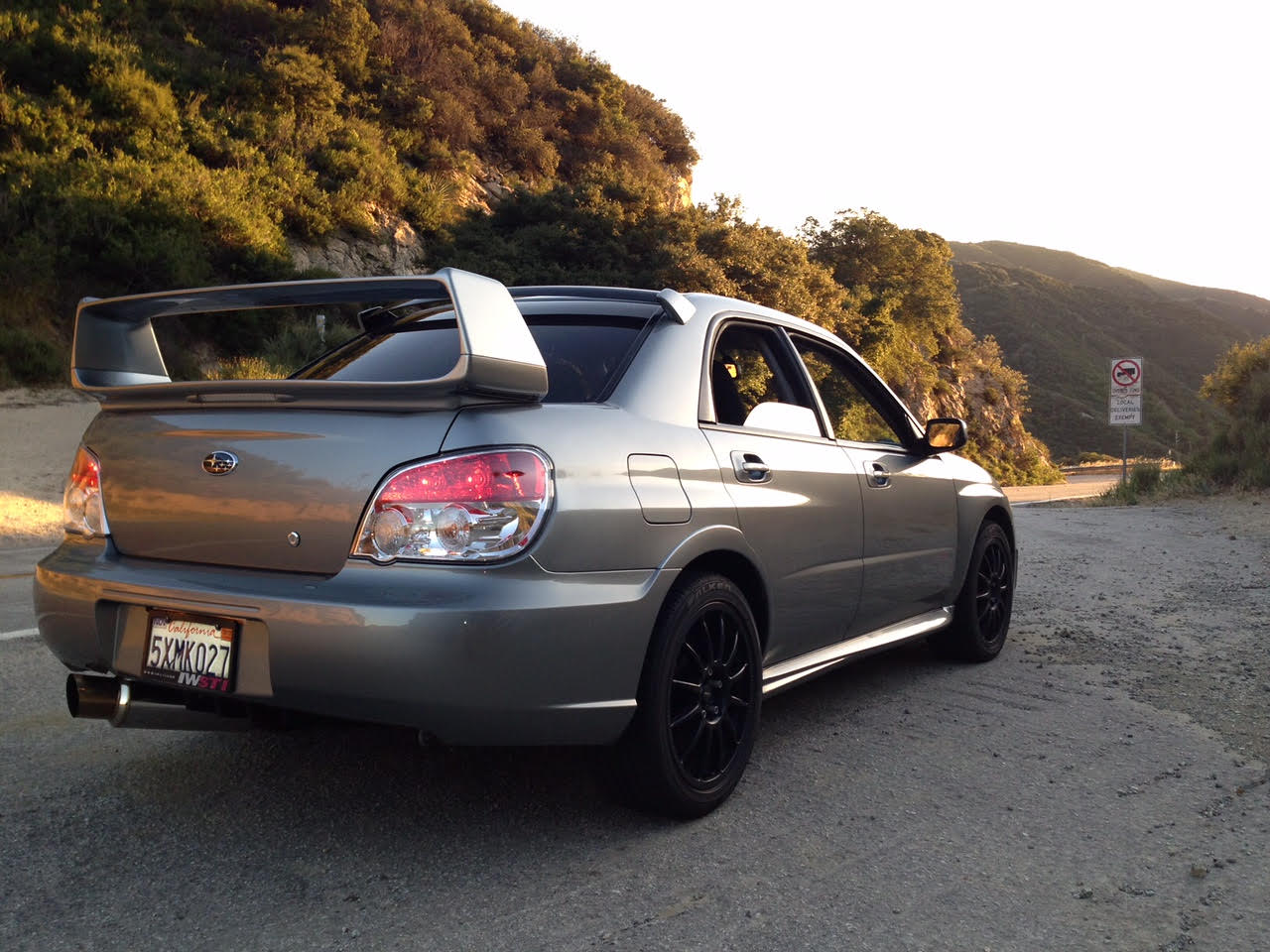 Things took an unexpected turn when the oil pickup cracked and completely seized, destroying my motor the day after I bought it! So here I am standing on the side of the road at 2am, waiting for a tow truck, gazing upon my broken dream, and near tears. I was sick to my stomach thinking about what I had just done. Luckily, the trusty Tacoma hadn’t sold yet, so it was back in action while my dream car was down for the next four months. With my complete EJ257 long block being trash, I needed to source an engine, which is exactly what I did. I found another STi that supposedly had rear fire damage, and purchased the motor with zero knowledge of what I would find inside of it since I had decided it would be rebuilt before installation anyways. I was now at the cross road of doing an OEM rebuild or building it for strength and more power. Needless to say, forged internals, cams, oversized valves, ported heads, and all the accompanying pieces were ordered and assembled to create a stronger motor ready for more power. Before I went crazy with power, I wanted to get the car feeling more stable and confident. I finished everything from chassis bushings and solid mounts to lateral links, sway bars, roll bar, and a tubular subframe. Handling was feeling better at this point, but it was time to address coilover selection. Upon research, I stumbled across a video of cars ripping around a track on air suspension. Up to this point, I hadn’t even considered air to be an option on a car that I was building to handle well. 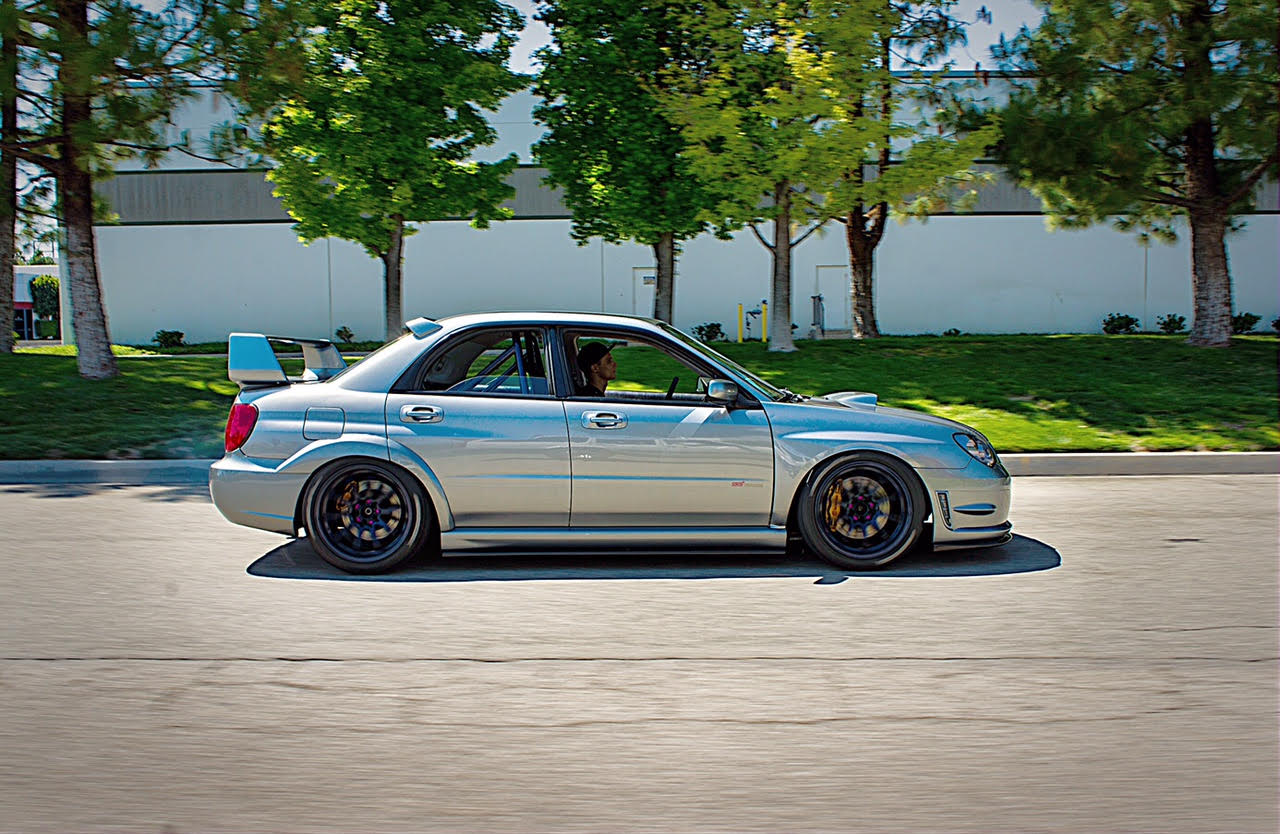 The more I researched air suspension, specifically the Air Lift Performance system, the more appealing it became. I never thought I’d be able to drive aggressive, low, and not sweat the sight of speed bumps and ugly driveways. With the Air Lift Performance air suspension kit for my Subaru STi and AutoPilot V2 air management, I can do all of these. The main reason I chose to give air suspension a chance, is because at this point my STi was still my daily driver and I didn’t want to be like all the other cars I saw scraping and getting stuck on driveways. So I knew that if the Air Lift Performance suspension lived up to its claims, it would be exactly what I was looking for. After designing a custom mount that would hold my tank, compressor, and manifold safely in the trunk at the lowest possible point, I had everything I needed for install. Installation was completed over a few days and was finally riding on air at this point. I was surprised with how amazing it felt, as this was the first time I had ever ridden on anything equipped with air suspension. Everything felt stable, smooth, and overall better than my stock setup. Most importantly, I knew I no longer have to worry about scraping around town. At this point I was having my fun rolling up and airing out in front of everyone at meets and shows, leaving me feeling like a celebrity on the red carpet. This was great and all, but wasn’t at all the goal of my build. This car was destined to carve corners and rip straights. 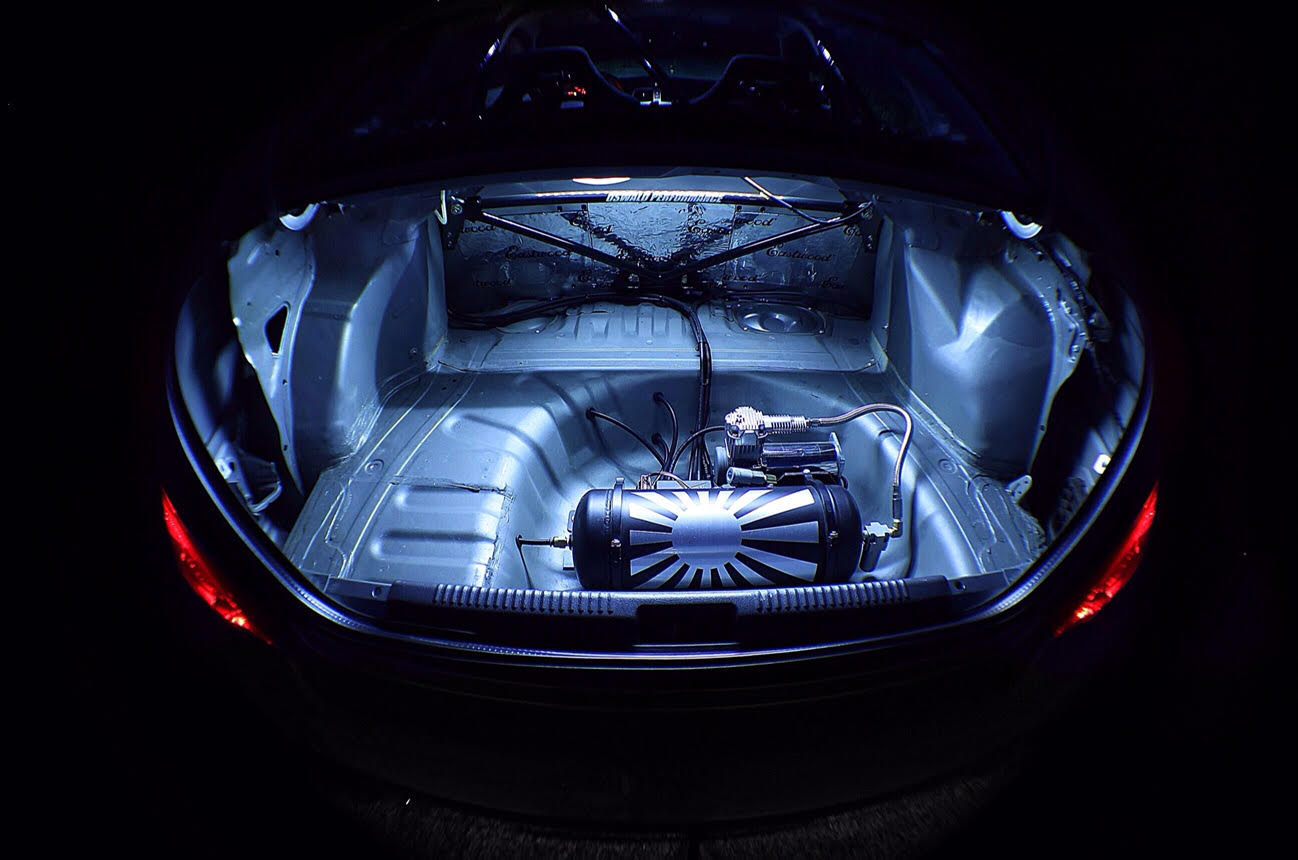 In order to get the car to stick better with all of its new suspension bits, I managed to fit 275/35/18 tires with the help of some flares, creativity, and determination. In addition to tires, I managed to corner balance the chassis thanks to the accuracy of the V2 AutoPilot management system. Now that the car had grip, it was time to improve power output. By this time I had already been on an 8 month waiting list for the new Borgwarner EFR 7163 turbo. I finally got my hands on it, as well as 1000cc injectors, fuel pump, front mount intercooler and all other components needed to complete the turbo upgrade. After installation I headed to Yimi Sport Tuning where the car put down 396whp and 367wtq on 91 octane. Needless to say my first drive with the new tune was nothing short of amazing. I was now daily driving my dream car on air suspension with 400whp, 140 tread wear tires, bucket seats, 5 point harnesses, a roll bar, stripped interior and a disturbing ear to ear grin. 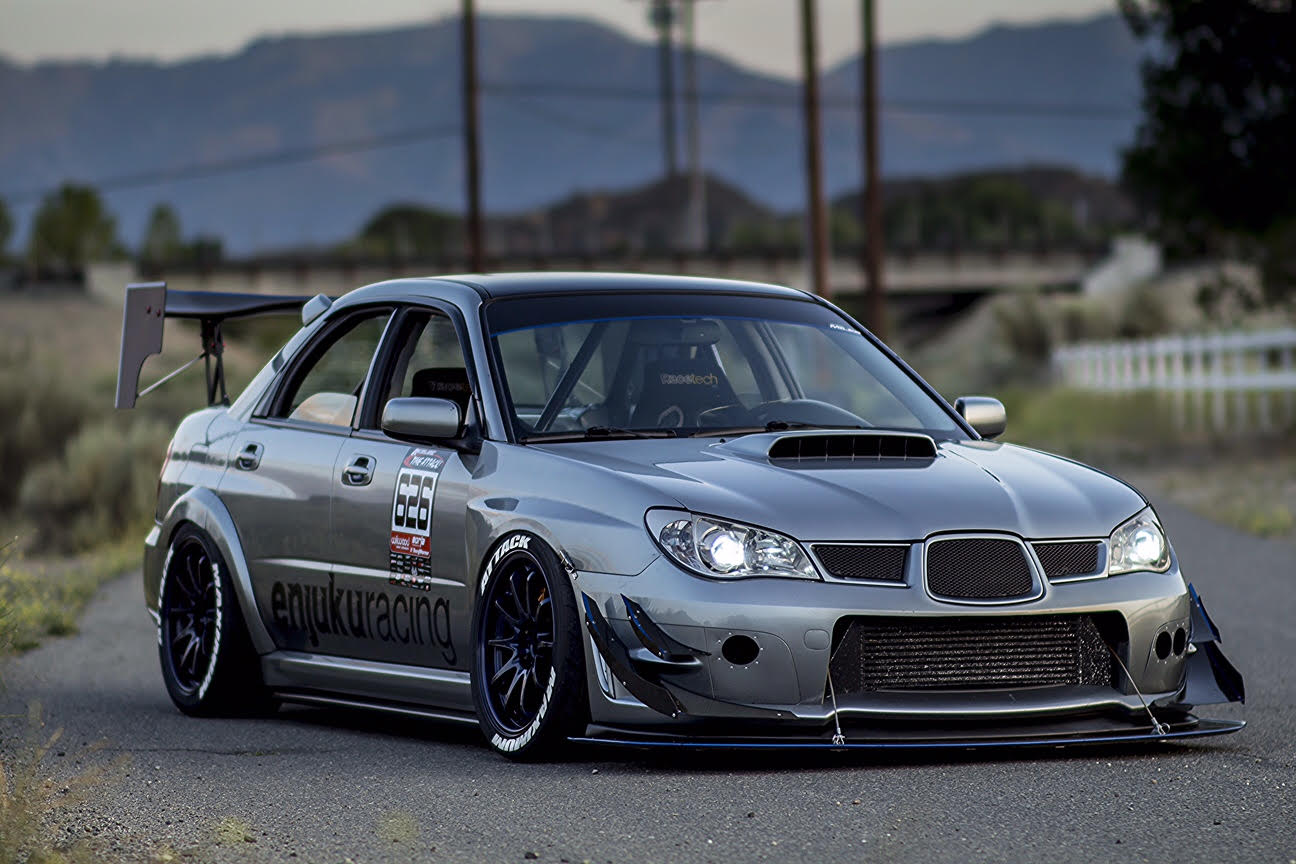 To say that my original plan for the car had changed would be an understatement, after all this was supposed to be my reliable daily driver. I attended a few track days and began to feel the stress of knowing in the back of my mind that this dual duty car had to get me to work on Monday. It was at this point that I picked up my 1995 Mazda Miata, to be strictly used for commuting in order to further my STi build. With practicality virtually out the window for the STi, some adjustments needed to be made in hopes of lower lap times. One of which was stiffening the Air Lift Performance struts and bags to create a more direct feel to the pavement. This was made easy thanks to all the help and advice from the engineering team at Air Lift Performance. The customer support I have received from Air Lift Performance is top notch. Since I’m new to air suspension, and the effort put forth by lead engineer Brian Vinson to help me understand the functionality and performance capabilities of this system has proven invaluable. With my new understanding of tweaking the struts and bags in a similar fashion to conventional coilovers, I was confident in the adjustments I was making and had no doubt that my lap times would subsequently drop. With full confidence in my air suspension, I registered to compete in the Redline Time Attack street all-wheel-drive class. 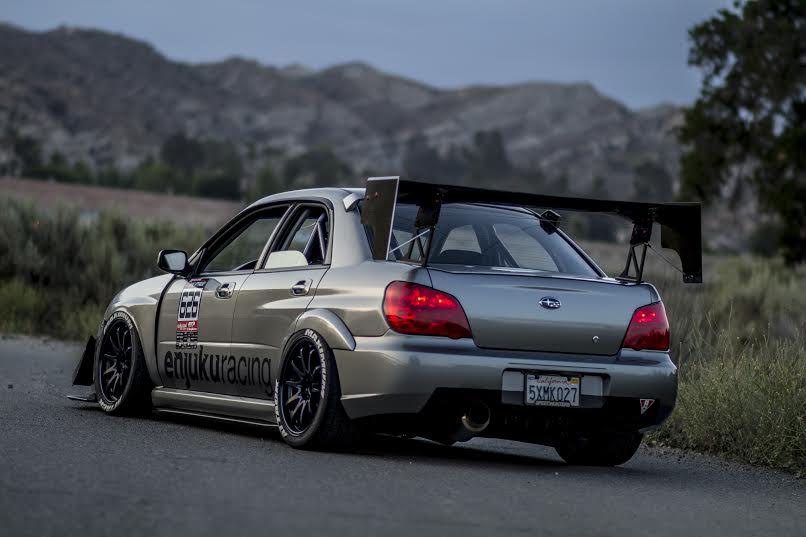 Before my first race, I mounted a 67” APR wing and had WASP Composites fabricate a chassis mount front splitter. Throughout round 1 of Redline Time Attack at Buttonwillow Raceway, the car received endless compliments and photos. My favorite part was talking with fellow competitors and seeing their faces when I told them I was competing on air suspension. I received the same confused reaction from each individual as I was forced to open the trunk and reveal proof. Not a single enthusiast that I encountered had even considered air suspension for their track car, as they had latched onto the notion that air is for hot rods and show cars. I was happy to prove disbelievers wrong with my first place finish! I no longer feel as if I need to convince friends and fellow enthusiasts that air suspension can truly do it all, as the results speak for themselves. Overall, I’m a very satisfied customer that wouldn’t hesitate to recommend Air Lift Performance to enthusiasts pursuing track, show, or street performance. 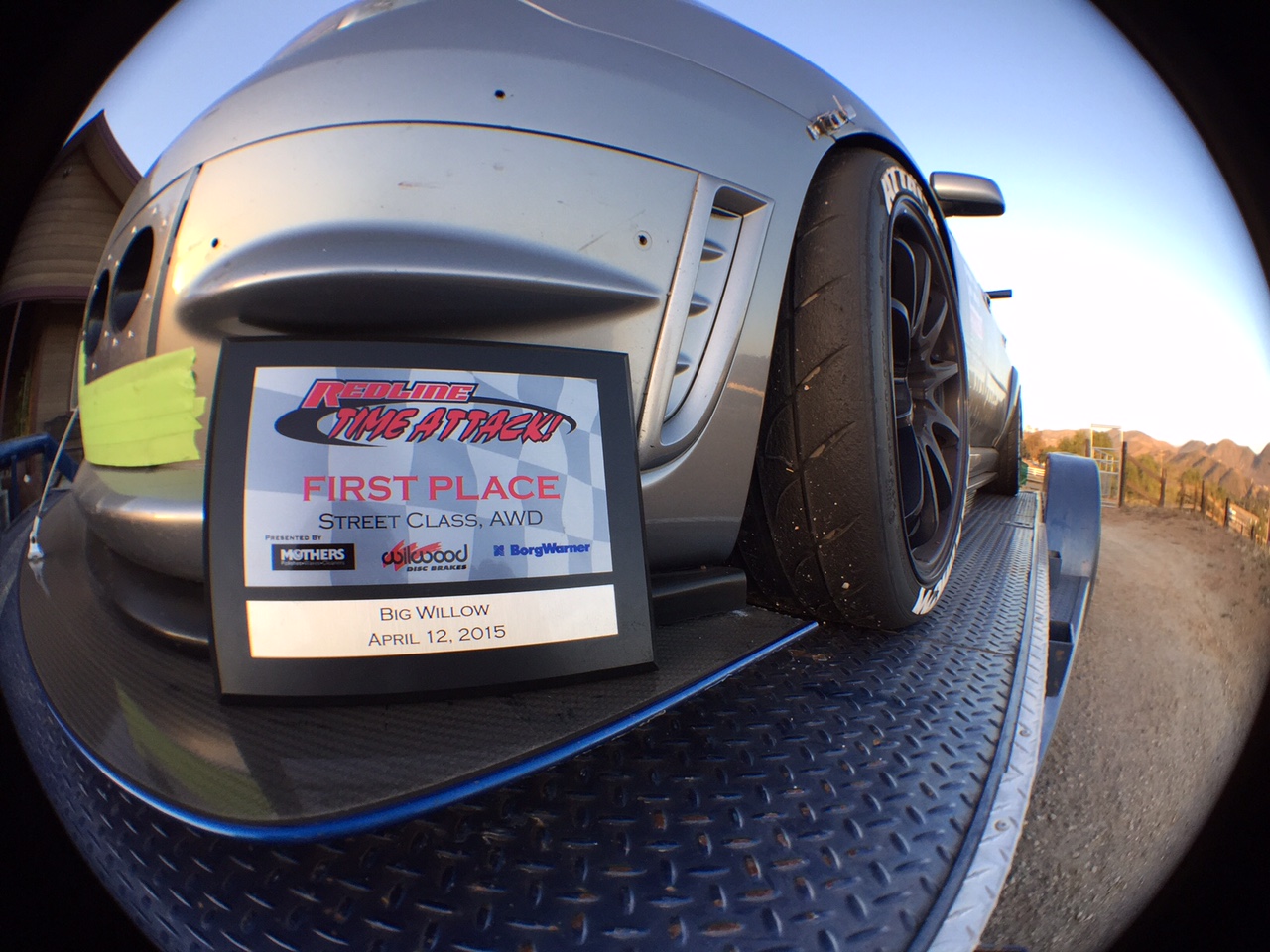 To keep up with Cody’s #lifeonair, check him out on Instagram @sidewaysandsmiling