Sunny Side Up: Meguiar’s UK B122 Nissan Sunny Pickup Truck

When you’re a global car care brand like Meguiar’s, choosing the right project car is no easy task. How do you appeal to all types of consumers without alienating yourselves from new buyers, yet still build something cool and eye-catching for those already aware of the brand? The easy option is to choose the latest […]

When you’re a global car care brand like Meguiar’s, choosing the right project car is no easy task. How do you appeal to all types of consumers without alienating yourselves from new buyers, yet still build something cool and eye-catching for those already aware of the brand?

The easy option is to choose the latest performance VAG motor, slam it to the ground with killer wheels and wait for the internet to explode. Meguiar’s UK likes to do things a little bit differently… 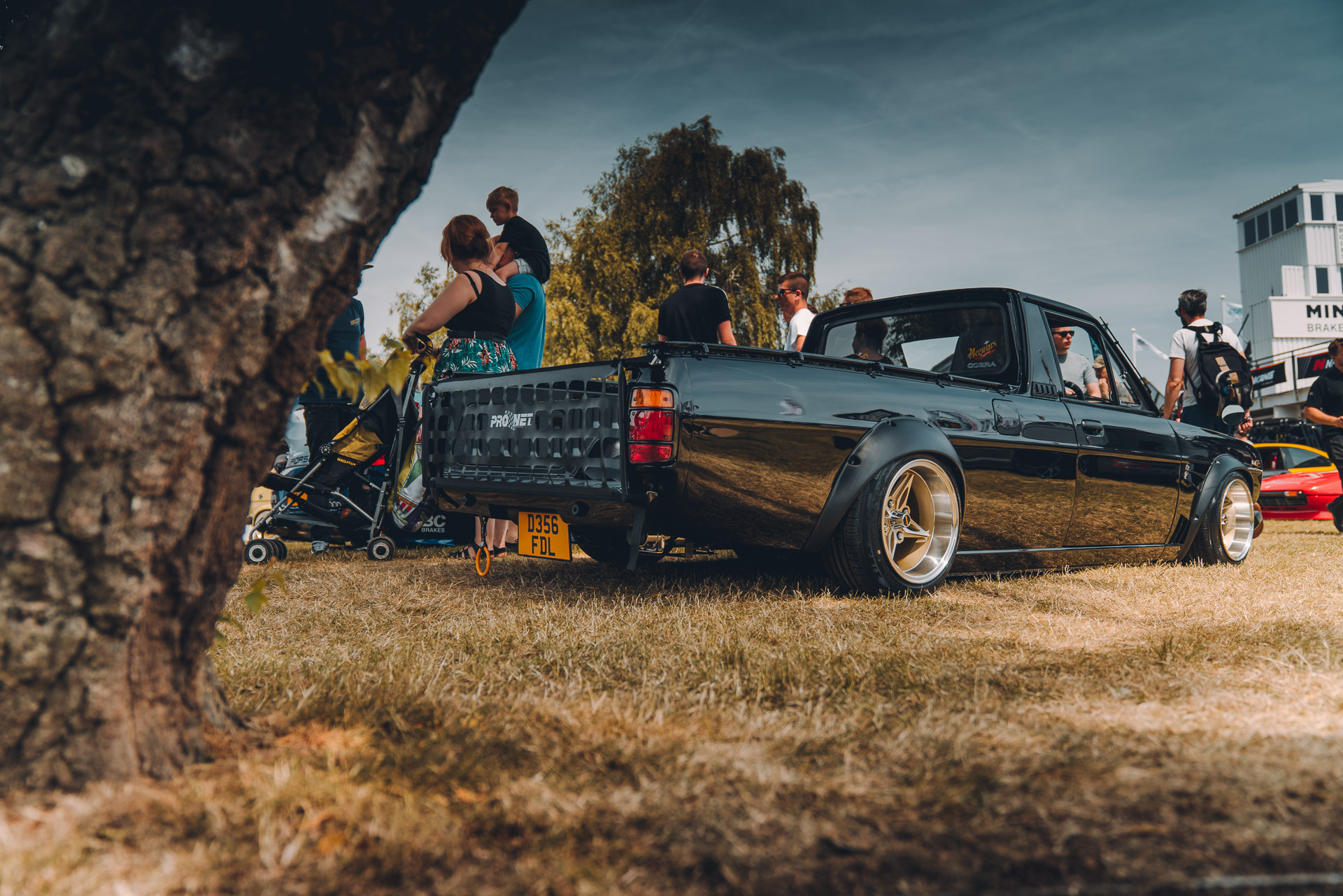 With their show fleet already comprising of an ex-police Crown Vic (slammed on ALP, of course) and a period-perfect ’66 Ford Econoline, normal and easy was never going to cut it for the Daventry-based team. The only criteria for a new build was that it had to look cool and, preferably, not be an American manufacturer.

With this build, we think they’ve ticked both of those boxes. 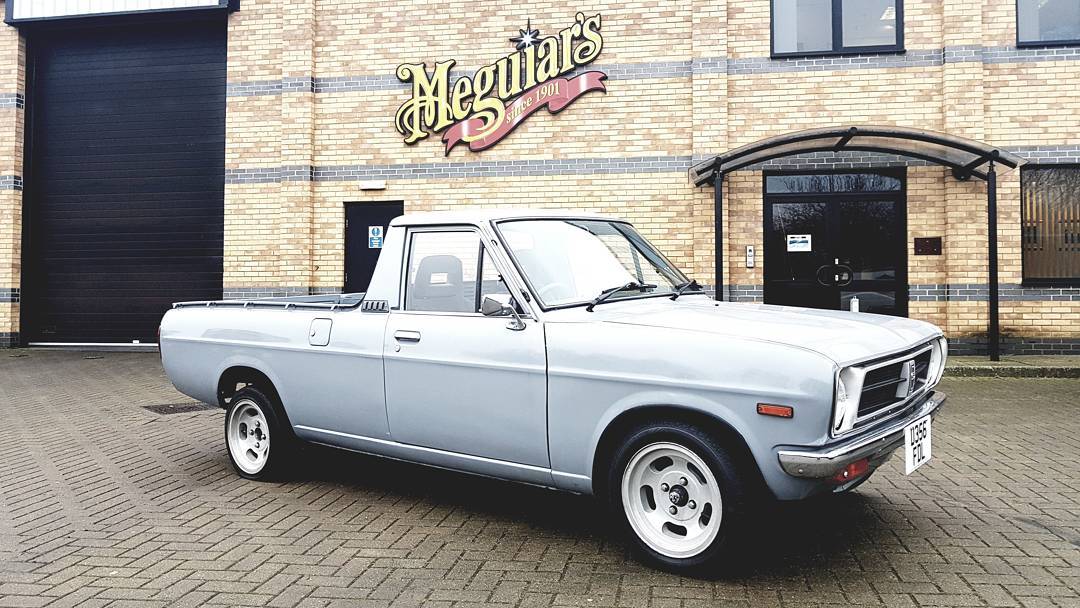 The name itself gives a little hint to its origin and overall theme. Originally starting life as a B122 Nissan Sunny Pickup, Meguiar’s UK wanted to go down a much more JDM route with this build, albeit with a modern twist. Not a restomod, not a full custom build, but instead somewhere in between. 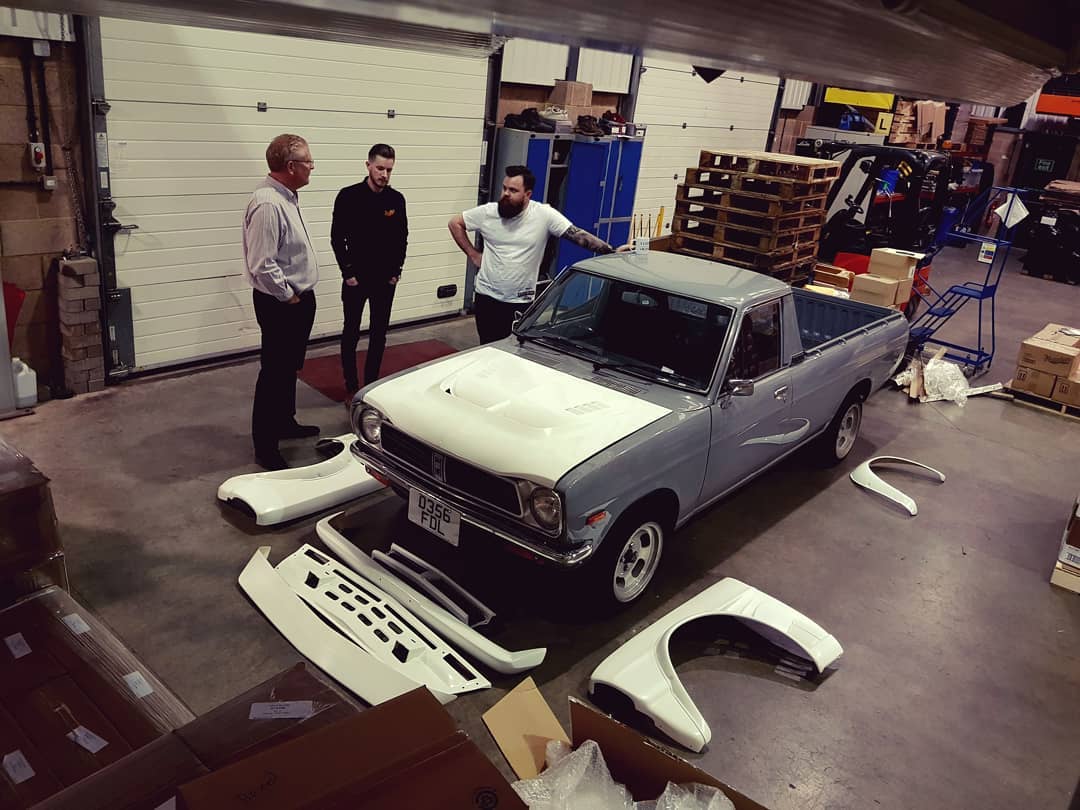 The team first took delivery of the truck back in 2017 but (as with most projects, we know how it is) it sat parked up for several months while the team was deciding which route to take with the build. In fact, it wasn’t until February of 2018 that the build really started to gain traction, helped in part by a massive box of parts from Japan, the most important being a box labelled “09 Racing Japan.”

You see, in Japan there’s a trend for putting old-school front ends on pickup trucks, similar to what Rocket Bunny has done in recent years with the S14 & RX7 “Boss” kits. But 09 Racing in Japan has been pulling this trick for WAY longer than Miura-san, and their conversion of choice is the Hakosuka GT-R! 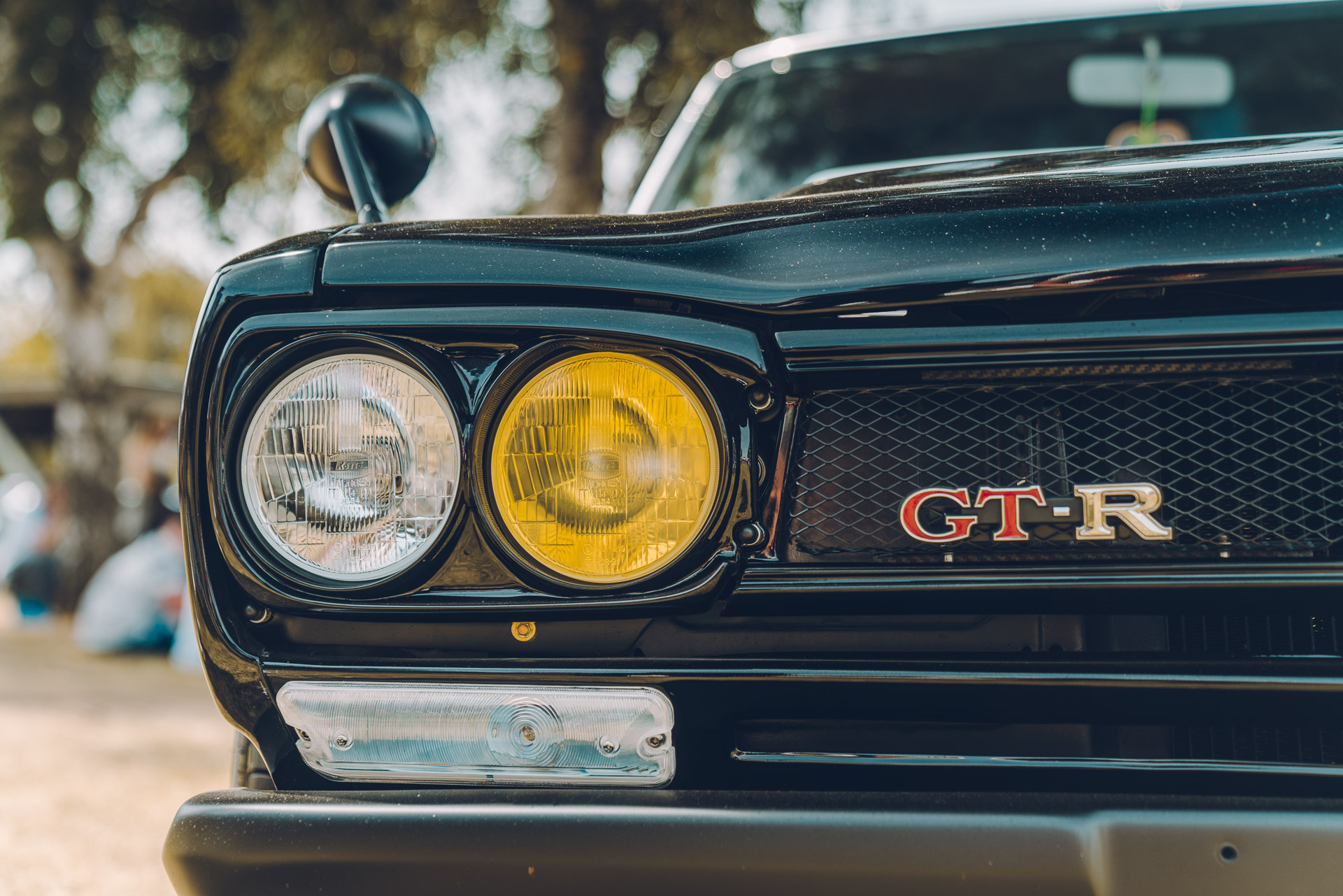 Yup, that’s right. This humble 1200cc Nissan Sunny Pickup now sports a legendary GT-R front end conversion and, while it sounds hideous on paper, in metal it’s ALL kinds of awesome! But the front end is only one piece of the puzzle – we all know a proper build requires much more than a little bit of bodywork. 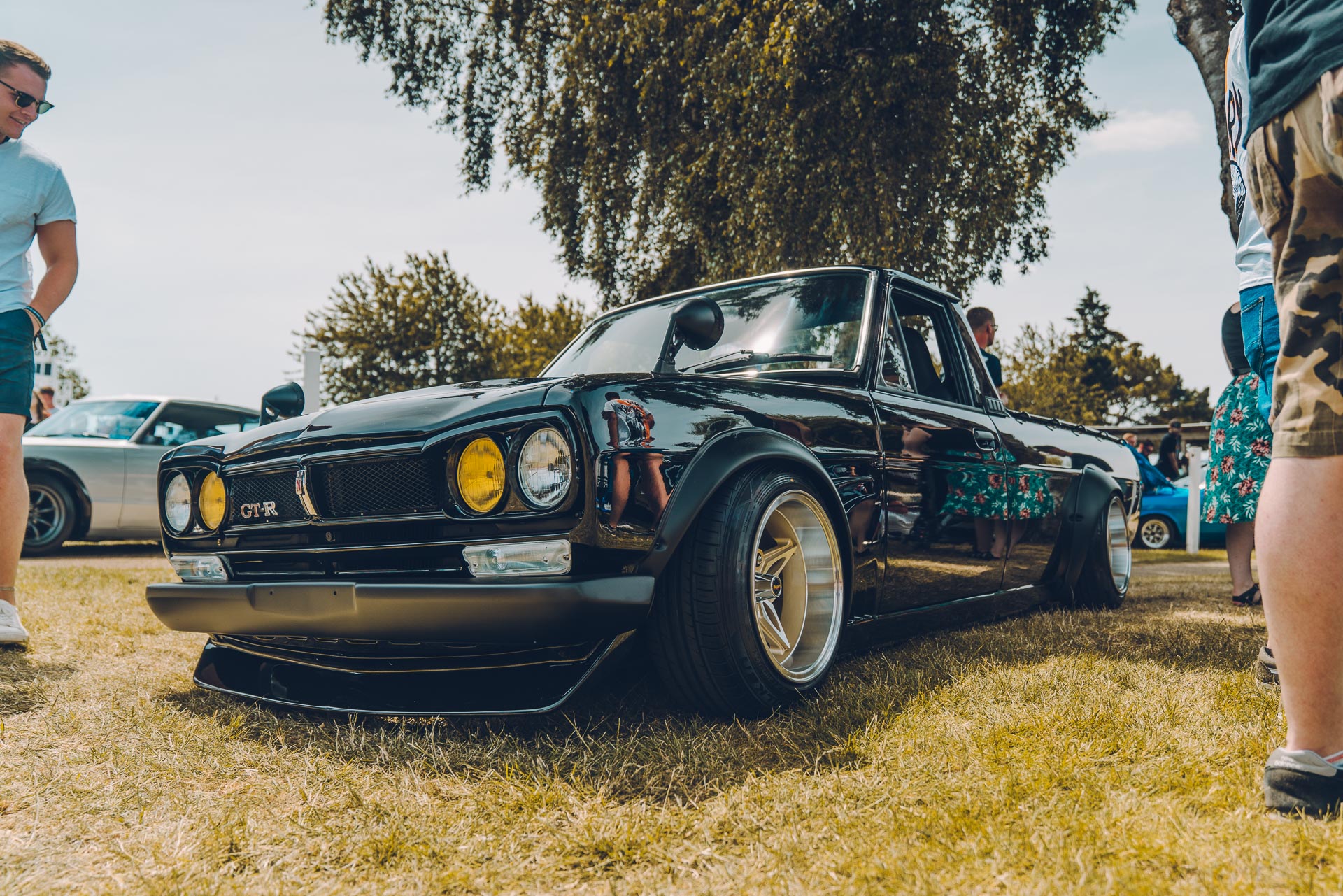 Being a Meguiar’s show car, the paint finish needed to shine, which led the team to choose every detailer’s nightmare: black. Get it right and the finish is second to none. Get it wrong and any swirls or cobwebs are made infinitely worse compared to other, lighter colors. Long-suffering friends (and neighbors) of Meguiar’s UK – Reflex Auto Design – took on the paint and bodywork, installing the Hakosoka front end along with flaring the rear arches and relocating the mirrors. 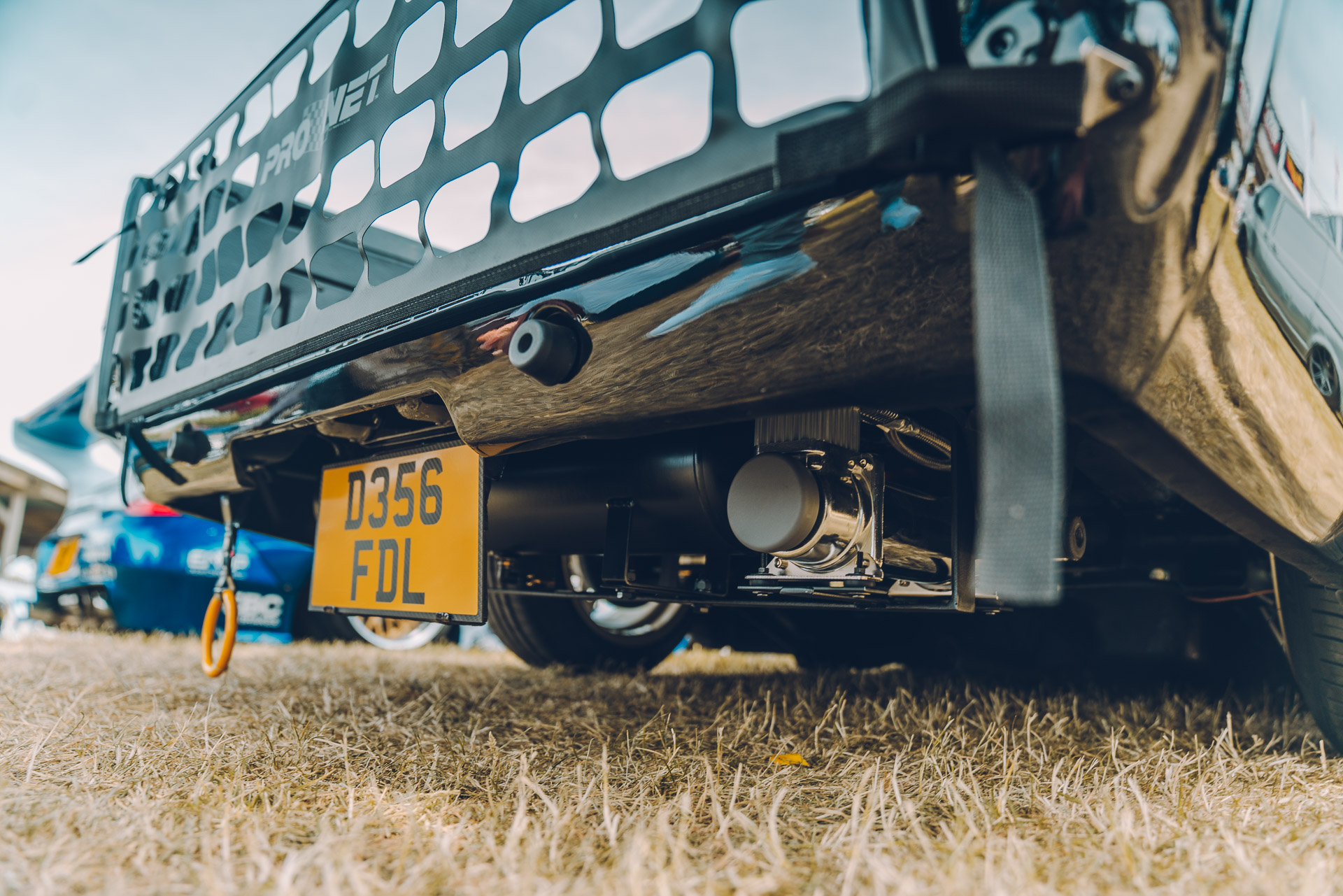 Super-high suspension might be necessary for an actual workhorse pickup, but with this one being a show car for Meguiar’s, there was only one solution – Air Lift Performance.

Having fitted Air Lift Performance suspension to the Crown Vic several years back, Meguiar’s already knew the benefits air brings, not to mention the drivability when racking up thousands of miles on the show scene.

Fitting the bags to the pickup was left in the trusty hands of Phil at The Install Company, a man whose skills and ability are second-to-none. We’re proud to have Phil as an Air Lift supplier and installer. 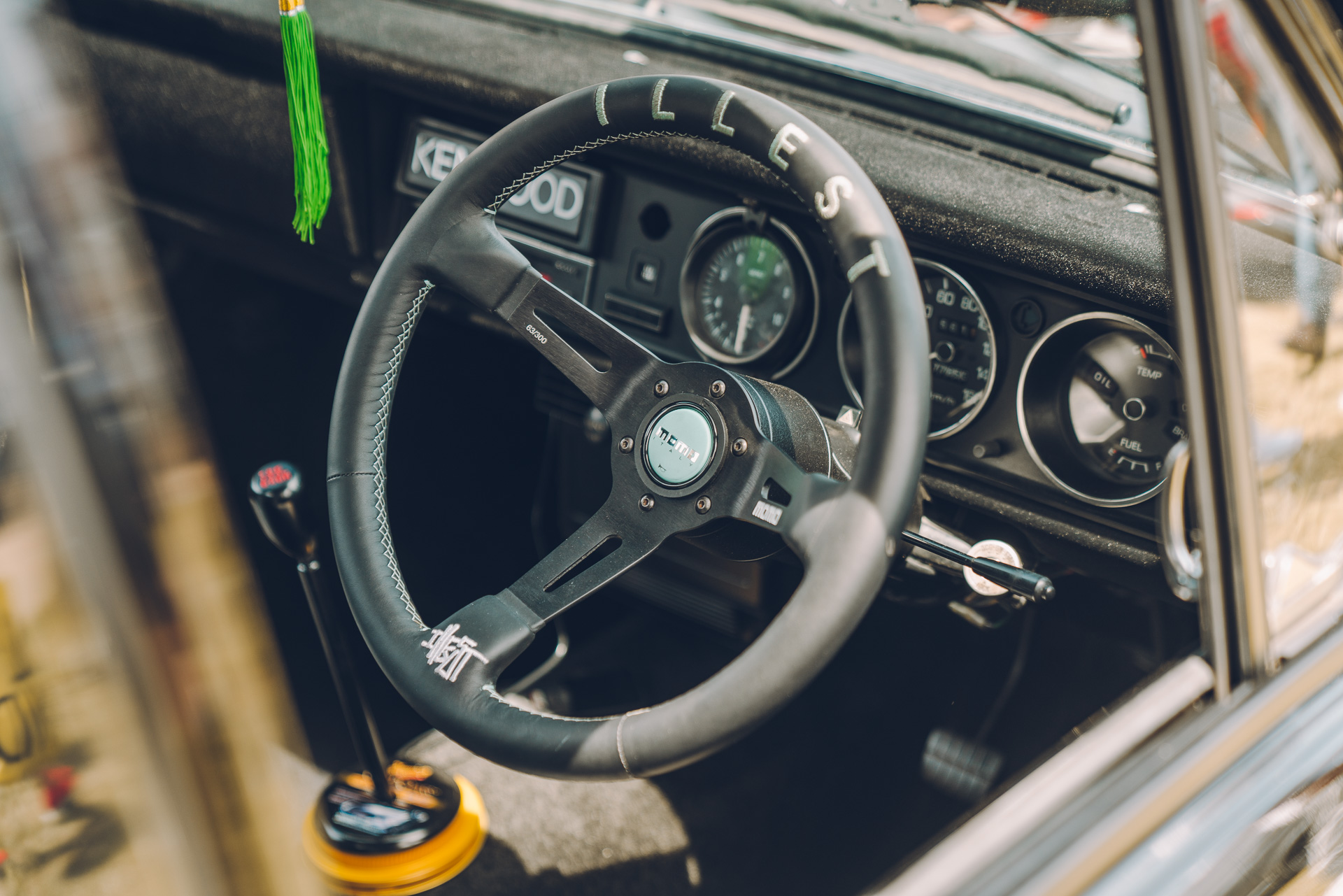 The install is completely hidden under the flat bed, with the only giveaway being the Air Lift 3P controller mounted in the dash. But we don’t think they’ll be driving it around on stilts, though. We’ve been told already they’re adopting our motto of ‘Drive Low, Park Lower!’ 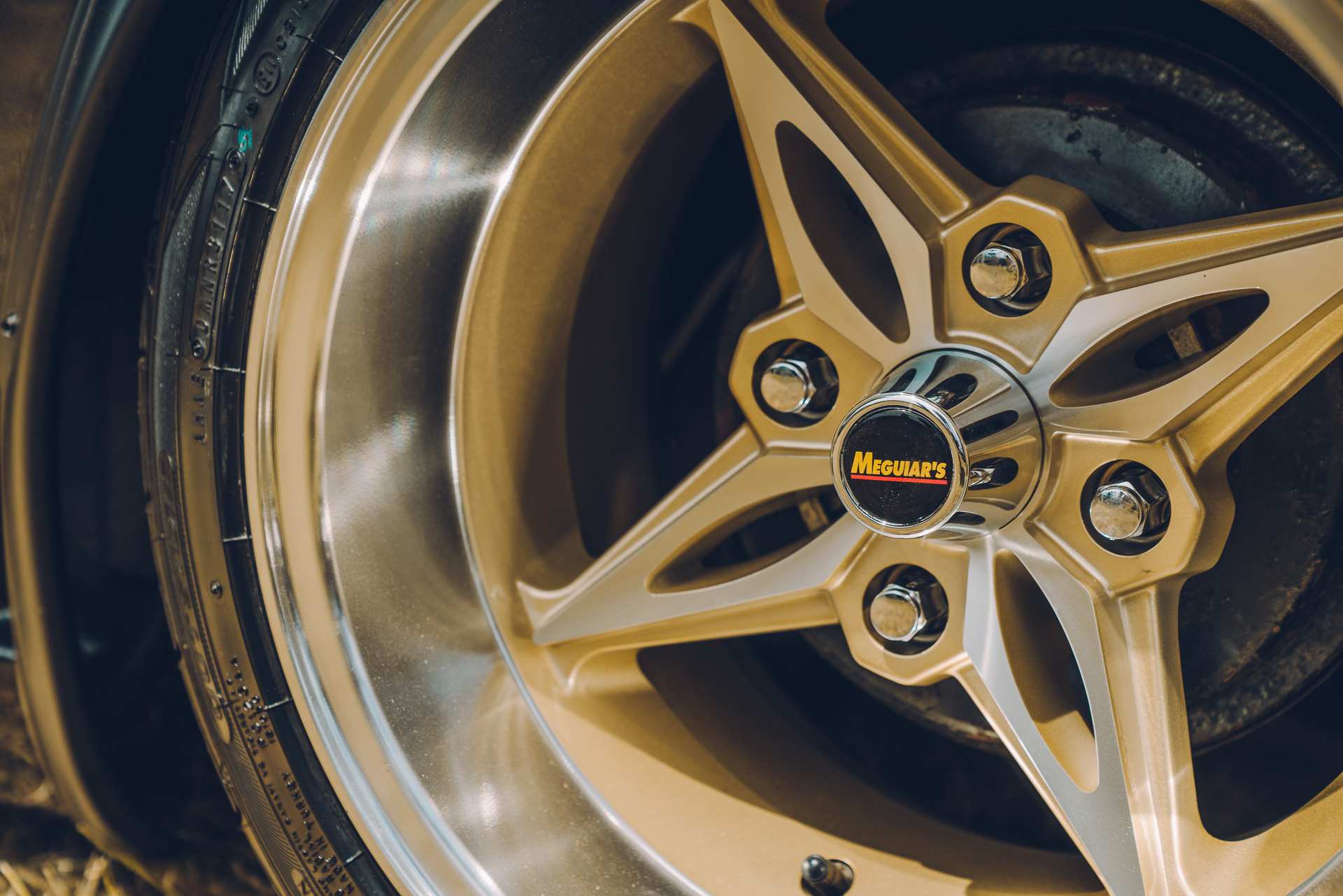 For the interior a pair of Cobra Nogaro seats perfectly fit the cabin, but these aren’t off-the-shelf items… “Off the shelf” just doesn’t exist when you’re building a one-off Sunny Pickup. Porsche Pasha centers and custom stitching give a retro vibe to the modern-day buckets, while a Kenwood KDC-W707 head unit provides all the audio required in a truck that weighs a mere 1900 lbs. 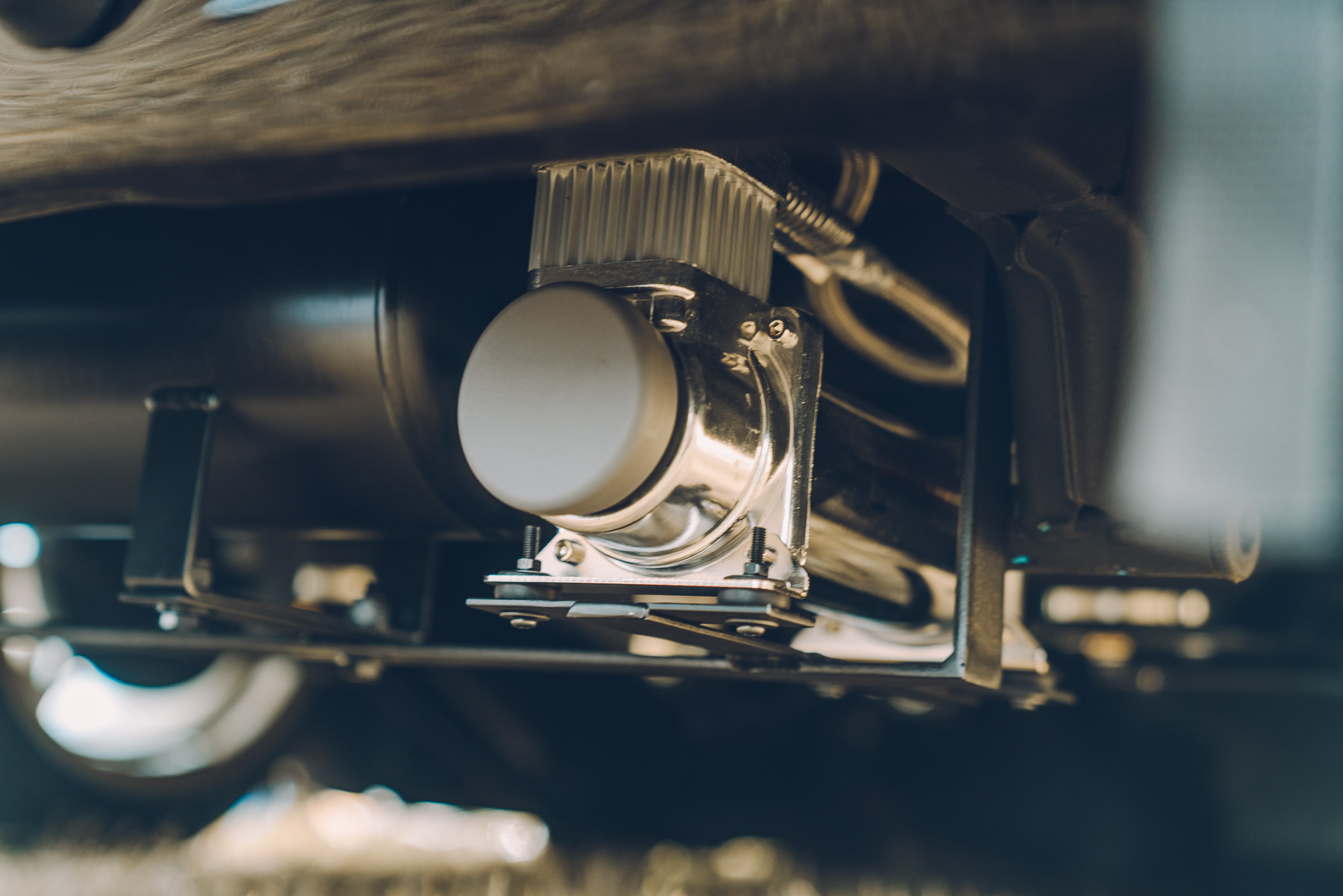 Finishing the overall look is a set of Autostar Kanji wheels, measuring in at 14x9in all round. These look like they are straight out of the 70s, but are, in fact, quite a modern wheel, supplied by Rota Wheels UK. The gold centers perfectly match with the black bodywork, and the end result is one of the coolest Japanese builds we’ve ever seen from the UK. 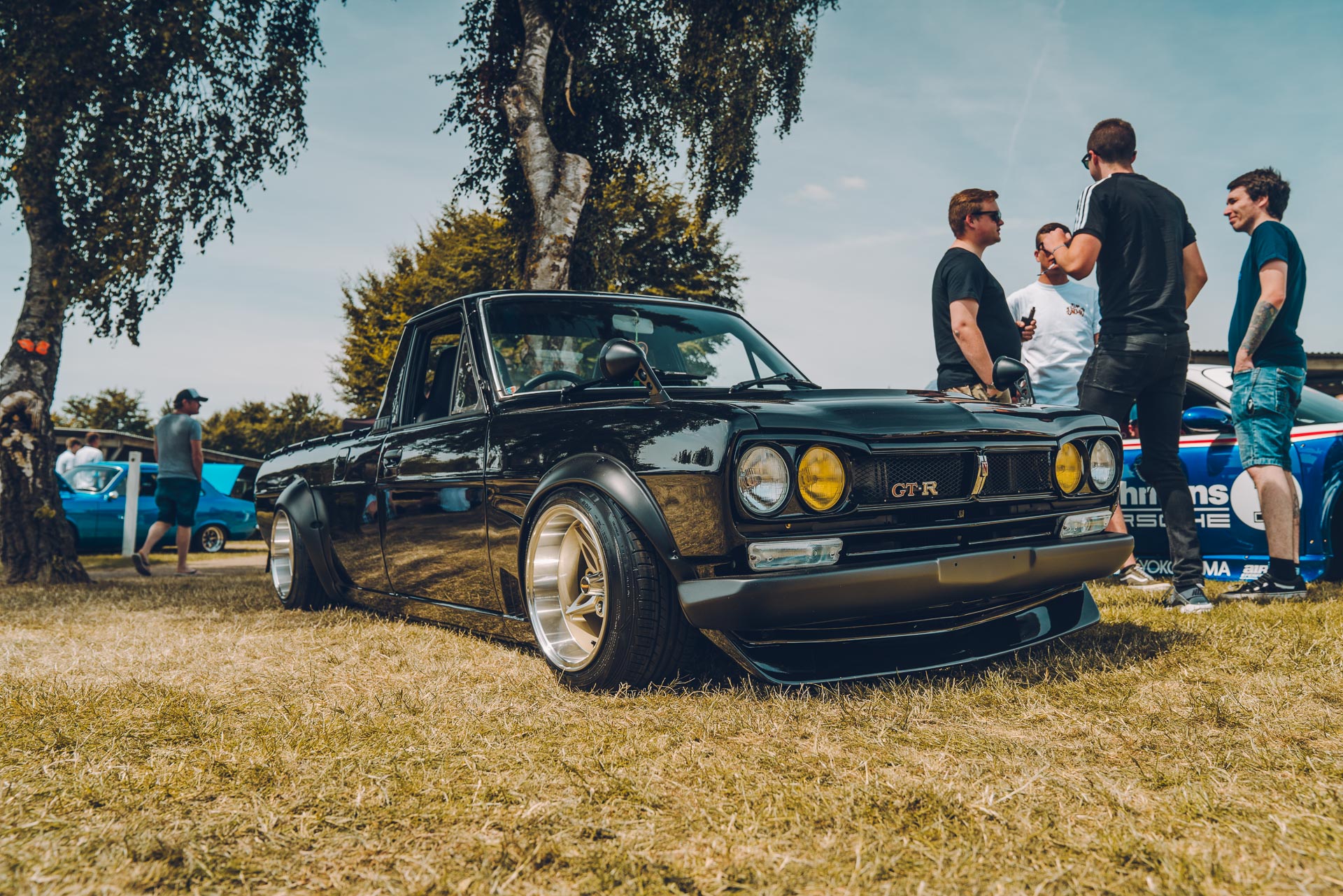 You know what we love most, though? This is only phase one of the Sunny build.

The team at Meguiar’s are already planning on swapping out that 1200cc 4-pot engine for something a bit more exciting, so watch this space…