I have spent my fair share of road time behind the wheel of the Air Lift Performance Mustang GT, but have not had the opportunity to throw it around a real race track. So we packed up and headed for Waterford Hills road course.

I have spent my fair share of road time behind the wheel of the Air Lift Performance Mustang GT, but have not had the opportunity to throw it around a real race track. So we packed up and headed for Waterford Hills road course. Keep in mind I come from a drag racing background, so this was my first time on an actual road course and thus unfamiliar territory.

The day started off with taking a ride in our black pony with our resident hot shoe and ALP Engineering Ringleader Brian Vinson. Half way through lap one I was starting to rethink the decision I made to have a sausage McMuffin earlier that day. As I clung on for dear life to anything within my grasp, it made me realize that this car carves corners like Grandpa carves turkey on Thanksgiving.  Again not the best time to think of a food reference…. Brian was putting the car so hard into corners that most mortal men on traditional lowering springs or even coil-overs would cringe in fear. 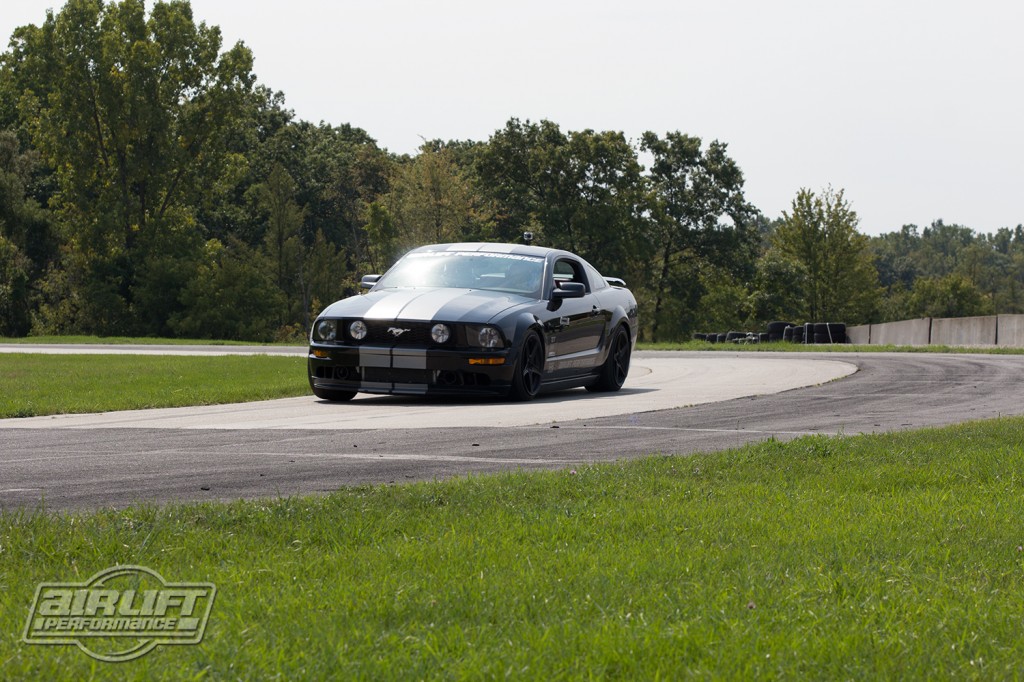 After a little recovery time and a few bottles of water it was my turn at the wheel. I could not believe how fast I could enter a turn and feel confident of what the car was going to do! The car was completely predictable in each corner and produced excellent feedback throughout the track. Every lap I gained a little more confidence in my driving and was able to stuff the car into the corners without issue.

Now I know what you are thinking, but contrary to your thoughts this car is not set up with all sorts of fancy chassis stiffening equipment. It simply has an Air Lift Performance air suspension and a rear Helwig sway bar, that’s it. Sure the Baer brakes, Vortech supercharger and MRT Direct exhaust help us to hustle around the track, but when it comes to corners it is all air baby!

As with most track days we were not the only ones tearing up the asphalt, which gave us the opportunity to give some rides to people who may have been a little skeptical about air suspension being able to perform.  After watching us for several laps on the track, the drivers for Capaldi Racing meandered our way to see what we were all about.  The usual jokes about air suspension being mushy and under-performing quickly ensued until they hit the track in our car. Take a look at what professional Grand-Am road course driver Craig Capaldi and fellow Capaldi club racers Charley Matus and Chris Capaldi had to say about their overall driving experiences in the Air Lift Performance Mustang.

“After getting the opportunity to drive the Air Lift equipped Mustang my overall perception of “air suspension” was greatly altered. The common personae which most foresee, myself included, is that the overall performance and ride will suffer in comparison to an OEM, or conventional style aftermarket package. I fully expected to jump into the car and experience a lazy, bouncy, soft feel. To my surprise I was overly impressed with the Air Lift performance and feel. Coming from a road racing background where big spring rates and alot of damping often gives me the feel and performance I seek to be competitive, I also appreciate a performance feel on the street. The car took driver inputs very well and never gave me any sluggish feedback through steering inputs. The rate of weight being transferred side to side and front to rear felt very well balanced and predictable, and the ride quality gives you the sporty feel for the street while still being more than capable to take it on track.” -Craig Capaldi 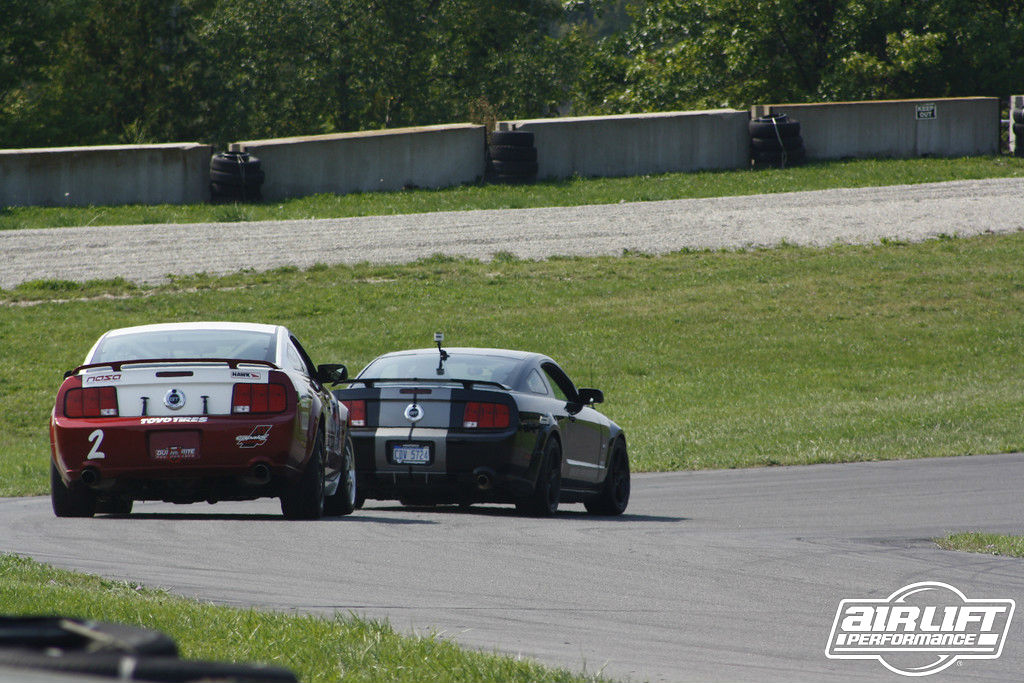 “When the guys from Air Lift Performance asked me to take a couple laps in their 2005 Mustang GT equipped with their performance air suspension, I was expecting the car to be extremely soft and lifeless – almost like driving an ’88 Town Car.   I couldn’t have been more wrong.  I quickly forgot I was driving a car with an air suspension; it was extremely responsive, flat, and very balanced.

I’ve been around performance Mustangs for a very long time and have driven many different kinds of suspension setups, and the Air Lift Performance Mustang is without a doubt one of the top three most fun street Mustangs I’ve driven.  The kit became even more appealing to me when Brian and Jeremy told me about how versatile the suspension is and pointed out how all the adjustments are done from inside the car.  You don’t have to spend the time turning wrenches like you do with conventional adjustable suspensions.  It was a blast!” – Charley Matus 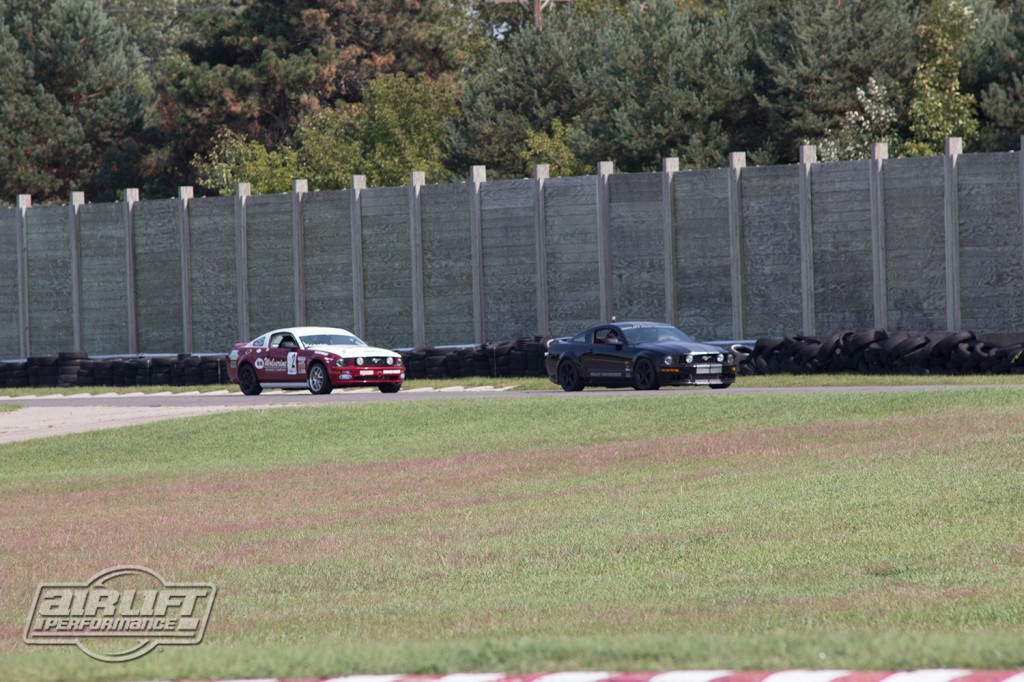 “Like my teammates, Craig and Charley, I was very skeptical about using air suspension in a performance application; and like the two of them I was blown away as soon as we got on track.  It was nothing like I expected.  I originally expected the car to feel extremely soft and vague, but it wasn’t.  It was extremely balanced and a lot of fun  to drive – as much fun as my race car!  It was very easy to drive and to get comfortable with.  It was very predictable and had no unexpected feelings and it only took a couple of laps until I felt like I’ve  been driving the car for years.  The package is very balanced and allows the car to have excellent turn-in, great power down, and is extremely stable under threshold braking.  The adjustability is fantastic.  You can start the day with a smooth street setup, stiffen it up for some track driving and at the end of the day you can hit your local cruise spot and lay the car on the ground to show people what a lowered car really looks like – all with the push of a button. I wish I could race on this suspension.” -Chris Capaldi

So there you have it another proven track day under our belt and an excellent testimonial from a couple of real race drivers about how well you can handle on air. What are you waiting for? Order your Air Lift Performance suspension kit today!!